END_OF_DOCUMENT_TOKEN_TO_BE_REPLACED

The photo is below, but I heard about this one yesterday and thought there might be a lot of confused folks out there…

It was a solar eclipse folks, not a sign from God. It certainly is interesting no less though right?

Who thinks Satan, that would be the Devil has horns?

I hope not. Look, God did not create Satan to look like a monster. If you flip your Bible over to Ezekiel 28:12 you will quickly find out that Satan is “perfect in beauty”. Yes, I know it says the prince of Tyre, that is only an example. The prince of Tyre was certainly not “in Eden the garden of God” like verse 13 tells us.

Satan certainly was though.

So no, Satan does not have horns. That is a picture man through church tradition painted into your mind, not God.

In Revelation 13:11 you can read about the symbolic Dragon who has two horns though. That is Satan as Revelation 12:9 will explain, and again symbolic. Satan is not a Dragon, and he does not look like one either.

Do you know what the two horns of the Dragon, of Satan symbolize?

Power, horns are symbolic of power and those two horns represent the sixth and seventh kingdom from Revelation 17. If you want to learn more about this I highly encourage you to read The Scarlet Beast With Seven Heads And Ten Horns.

This morning, a photographer captured these ‘red devil horns’ sunrise photos during rare solar eclipse mirage over the Persian Gulf. Between this, the earthquakes and the mysterious plane crash, it has been a very eerie 12 hours. #IranAttacks #IranWar pic.twitter.com/c0jsT8vKSU 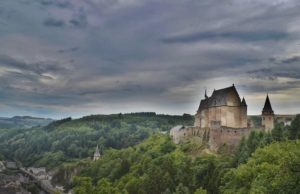